E3: Stronger Than Ever, The Power of Plant-Based Food w/ Rip Esselstyn

Meet Rip Esselstyn, a pioneer for the advancement of plant-based eating. He’s a world-renowned triathlete, best selling author, and former firefighter, all of which has been powered by a Plant Strong lifestyle. Rip joins us to talk about his plant-based journey, food culture in the fire service, and the inextricable link between health and performance.

For more information about Rip’s mission and plant-based resources for your agency (including the free 7-Day Rescue Challenge), visit PlantStrong.com.

Rip Esselstyn is a pioneer for the advancement of plant-based eating. He’s a world-renowned triathlete, best selling author, and former firefighter, all of which has been powered by a Plant Strong lifestyle. In this episode, Rip joins us to talk about his plant based journey, and the life-saving. benefits it can have for first responders. 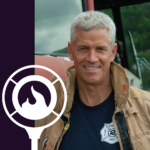 Rip Esselstyn spent a decade as one of the premier triathletes in the world. He then joined the Austin Fire Department where he introduced his passion for a whole-food, plant-based diet to Austin’s Engine 2 Firehouse in order to rescue a firefighting brother’s health. To document his success he wrote the national bestselling book, The Engine 2 Diet, which shows the irrefutable connection between a plant-based diet and good health. He is featured prominently in the documentary Forks Over Knives.

Where it all started: Dr. Caldwell Esselstyn (Rip’s dad), the Cleveland Clinic, and Reversing Heart Disease [01:12]

• What happened when a group of end-stage heart disease patients made the switch to plant-based. [01:58]

• “[My father] has found something that works and it’s something as drastically simple as just staying away from burgers, and chicken, and fish, and processed refined foods, and dairy products, and gravitating towards whole plant-based foods, as close to grown as possible, that are minimally processed that have all the good and none of the bad, and have the remarkable capacity to not only halt but also reverse, for example, heart disease.”

Common Myths About Plant-Based Eating, and Why They Are Myths [09:00]


• “All protein originates from plants, it’s the mother source of protein, it’s where all the essential amino acids are actually found and formed. As human beings, we only need somewhere between 5-10% of our calories coming from protein, and when you look at the macronutrient profile of plants… what you will find is that all these plant-based foods, if you look at the percentage of protein that’s in each one of these, it’s typically anywhere between, on the low end, 10%, and on the high end, upwards of 55% protein. To give you an example, white mushrooms, by calories, are 57% protein… Broccoli has more protein than steak does, most people don’t know that.


• “Anecdotally, I’ll just share with you, I was able to fuel myself, as one of the top triathletes in this country for over a decade on the power of whole, plant-based foods. I didn’t run out of steam, if anything it gave me more energy. It allowed me to recover faster, it gave me an enhanced immune system, so I very very rarely got sick… When you are fueling yourself with these foods that are so nutritious, that have all the compliments of the micronutrients, the perfect balance of fat, protein, and carbohydrates, you’re gonna hit a home run.”

MYTH #3: It’s too expensive to eat plant based, or too complicated and time consuming. [13:14]


• “For some reason people think, in order to eat healthy, you have to go to Whole Foods and buy a red bell pepper that’s organic for $4.99 / lb, and that’s just absolutely not true. You can do oatmeal, you can do beans, you can do bananas, potatoes, you can do frozen instead of doing fresh - it’s just as healthy... What I have found is that eating this way is about 25% less expensive than when you are buying animal products and meat and cheese, and all that stuff, and you feel so much better doing it.”
• How to tackle plant-based for the first time. [14:00]


• “Doesn’t everybody out there like beans? Don’t people like brown rice and bell peppers? Don’t people like the taste of oranges and apples and bananas and watermelon and roasted corn? I think people do. So to me, that’s just an excuse. It’s an excuse that, you know what – I don’t want to give up my steak or my burgers or my cheese – but once they understand how insidiously destructive these foods are, and why they are really laying the groundwork for […] chronic Western disease that’s at America’s doorstep, it makes it a little bit easier to give these things up.”

How a Friendly Firehouse Competition Led to Lasting Lifestyle Changes [17:25]


• “We decided to have a little bet to see who was the healthiest. And we decided that total cholesterol was a nice indicator of who potentially was healthier than the others. Four of us took the engine, we drove down to a lab, we all got pricked and tested, and one of my firefighting brothers, his cholesterol was 344 at the age of 33. He had a family history of men in his family dying before the age of 50 from heart attacks… It was just the perfect moment in time for us, as a crew at Fire Station 2 on the C shift, to start embracing [a plant-based diet].

• The plant-based lifestyle at Fire Station 2; supporting each other in health. [18:42]

What It Takes to Make the Switch To Plant-Based, and How To Talk To Your Crew About It [23:04]


• “Firefighters live in a culture that is steeped in unhealthiness. Most of these guys want to pride themselves on being fit superheroes, but the reality is they are medical time bombs.”

Plant-Based Eating Isn’t Hard, But Heart Disease and Cancer Are [26:34]


• “To me what’s hard is taking the path of least resistance, you’re eating the way most Americans eat, and then you come down with that stroke, you have that heart attack. You come down with your first bout of cancer. THAT is hard, that is difficult… and I don’t want that for anybody. If hard means learning to eat fruits and vegetables and whole grains… then that’s worth it. That’s ok, because all the benefits on the other end are so worth it.”

• “I think the crazy thing is, I saw Fauci say ‘we can’t open up this country because we are too sick’, and if you have these underlying diseases, forget it! Well, think about it, if every one of us was eating a whole food plant-based diet, and we didn’t have these underlying diseases, and we has this wonderful immune system, we could open up the economy. Right? We wouldn’t have 207,000* people dead from COVID-19.” *As of September 30, 2020


• “I literally could eat those things – the sweet potatoes for lunch with beans and some greens, the rice and beans for dinner, the veggie medley, and then the steel-cut oatmeal or the big bowl concoction for breakfast – I could do that for the rest of my life and be supremely healthy.”


• “Anybody can eat meat. It’s easy, it’s tasty, but it’s not gonna get you to the promised land. So, to me, a real man, a real woman, will take a hard look at the data, the science, and then determine what is best for you, for your job, and also for your family.”

“After one month [on a plant-based diet], [my crewmate’s] cholesterol had dropped from 344 to 196. So it had dropped literally almost 150 points in less than a month. There were no drugs, no statins, nothing like that. He lost about 14 pounds and all the intangibles, sleeping better, more energy, no more gastrointestinal distress.”