Less than one year ago, Mark Niemeyer became the Chief of the largest fire department in Idaho: the Boise Fire Department. Looking back over his first 200 days as Boise’s Fire Chief, he discusses his experience transitioning to a different department, and shares the skills and mindset needed for new Chiefs to succeed.

In this episode, Chief Niemeyer speaks about leadership and his experience assuming the role of Fire Chief at a new department. 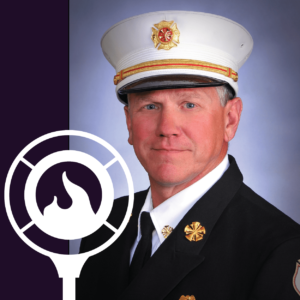 Less than one year ago, Mark Niemeyer became the new Chief of the largest fire department in Idaho: the Boise Fire Department. Chief Niemeyer has his roots in paramedicine, and served as the Fire Chief at the Meridian Fire Department for ten years before assuming his latest role. He is highly involved in the leadership circles of the West and serves as the Vice President of the Western Fire ChiefsAssociation.In this episode, Chief Niemeyer speaks about leadership and his experience assuming the role of Fire Chief at a new department.

Getting to Know a New Fire Department:


“[The] strategy is pretty simple really, and the first one I recommend [is]: take your time. I know that sounds so simple, but in todays’ hustle and bustle world where you’re under a lot of pressure from a lot of different factions as a Fire Chief to get things done, sometimes taking your time is the thing that’s hardest to do… take the time to get to know the members, get to know the history, why do we do the things we do.” [1:17]

“What energizes me is that engag[ement] with my colleagues [who] I really respect.” [8:45]

“Some of the positions that I have attained, I never really set out to attain, but I was prepared for them. As I go out and give leadership presentations to young firefighters, part of my message is, just always be prepared… opportunities are going to come before you that you don’t anticipate coming.” [10:14]

What’s Next for Chief Niemeyer and the Boise Fire Department [13:45]


The Movement Toward Servant Leadership in the Fire Service


“When you learn in leadership that you can let go of the reigns a little bit and let people bring their idea to the forefront – no idea is a bad idea – you never know what’s gonna come… I know the things that I’ve got in my head. What’s fun is that I don’t know what the others have in their head[s], and I’m gonna find that out.” [16:40]

“I think there is a transition going on in the fire service… I think there’s been a big shift in leadership where we understand servant leadership. We understand that, for us, it’s not our names on plaques or on trophies or on buildings, it’s about our collective success.” [17:22]